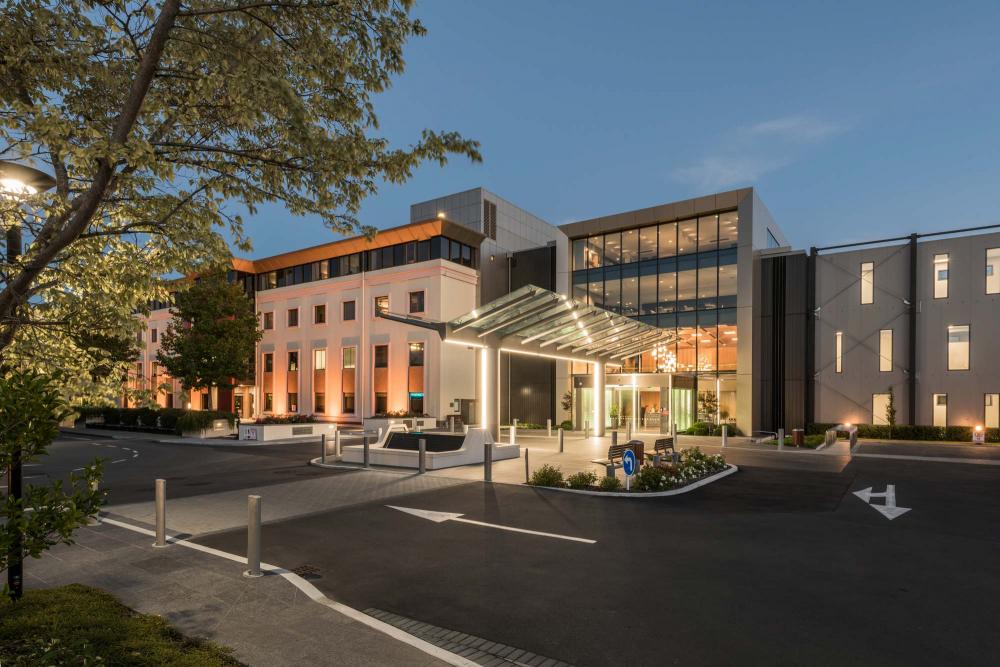 As one of the largest private hospitals in New Zealand, St George’s Hospital has state of the art facilities and technology which enable a large range of surgical procedures to take place.

The hospital is in the throes of an exciting redevelopment that continues to improve the quality and range of services available to our local community. Greg Brooks, Chief Executive Officer of St George’s, says the developments underway are transforming the patient experience at the hospital site in Merivale.

The final stage of the redevelopment has just commenced and will see the completion of new day surgery theatres, a purpose built maternity centre, new laundry, medical supply store and plant room.

Tony Hunter, Project Coordinator, is overseeing the complex redevelopment that will take a total of eight years to compete. Building on a working hospital site comes with its fair share of challenges, says Mr Hunter.

“The various stages all need to be completed while the hospital remains fully operational, with minimal disruption to clinicians, patients and staff,” he says.

“As we execute each part of the build we need to be aware of what utility services are live, so we can plan to re-route them. For a hospital this can be quite complex; with electrical, steam, air, mechanical and telecommunication connections to name just a few.”

Higgs Construction, the main contractor on site since 2014, was engaged on an early contractor involvement basis - “We have been working very closely with St George’s from the outset and have been involved in all the planning meetings and the enabling works,” says Paul Harris, Director of Higgs Construction.

Attentive scheduling and collaboration with a team of capable contractors has ensured building targets have been met. The team at Higgs Construction was central to this process, meaning the new Cancer Care radiation treatment suite and Pacific Radiology opened while construction continued on site.

In a hospital environment these services are often vital to patients’ lives. Melray Electrical, which has been responsible for transferring essential hospital electrical supplies to date, has won an award for their work.

The hospital redevelopment programme also incorporates environmental features including a system to reduce neighbourhood noise and state of the art heating and cooling design.

Performance improvements will vary between 150% to 300% over the operating range when compared to a similar commercial plant, according to mechanical engineer Mark Carey from Powell Fenwick.

The new building has also been built with seismic resilience front of mind. This includes state of the art foundation systems, says Daryl Partridge from Trengrove Architects.

“The new buildings have been constructed with a base isolation system, which means they sit on rubber pads that can move up to 650mm sideways in any direction.  This reduces the amount the buildings bend during an earthquake and protects the equipment, and of course people inside.”

In 2020 Cantabrians can look forward to the completion of a modern new facility which will continue to provide superior care to its patients.